Observer – excerpt below, full review at link
Tenors Keep Show Afloat in Met ‘Hoffmann’ and ‘Magic Flute’
But “routine” doesn’t have to mean “dull,” as the opening week offered a bouquet of striking individual performances. The flashiest turn of all was tenor Vittorio Grigolo’s manic take on the title character in Offenbach’s Les Contes d’Hoffmann on September 26. For a more harrowing account of a poet spinning out of control, you’d have to imagine a biopic of Edgar Allan Poe played by Judy Garland.

Even the fanciful Garland comparison is accurate, because Grigolo is an artist whose voice just gushes out, sometimes giving the impression it’s in control of him rather than the other way around. And yet, in the taxing final scene reprise of the poet’s passionate ode “Ô Dieu! de quelle ivresse,” the tenor’s voice never flagged; in fact it seemed to grow ever more vibrant.

Among the rest of the cast, only soprano Erin Morley proved a worthy partner, trilling her way through the ornate role of the robot Olympia (one of Hoffmann’s ill-fated loves) with virtuosity and wit. She’s ready, I think, to take on this opera’s other two “lover” parts, Antonia and Giulietta, particularly since the artists the Met fielded for these roles were so nondescript.
“

If relatively recent sound is the criterion, more rotation of the Lorengar, Deutekom from 1968 is called for and I would love to hear again the 1970 and 1972 broadcasts which have not yet made it to Sirius. The 1970 features the matchless Papageno of Hermann Prey (and live performance is quite a different thing than the recording studio) Popp is out there for one of her last times as the QotN; the 1972 features the strong Queen of Edda Moser and an unusual Pamina, Adriana Maliponte. If sound is not the sole criterion, it would be nice to hear Bruno Walter conducting in the early 40s, with Steber leading the three ladies in three broadcasts succeeded in 1945 by Regina Resnik. Kipnis and Pinza are 2 of the Sarastros. For really splendid Mozart in English, the 1950 with Steber moving up to Pamina, and Tucker as Tamino; Erna Berger sings the Queen in English under Stiedry.”

“THE MERRY WIDOW : Lehár
Original Air Date: 12/14/2017
Cast: Stare; Graham, Groves, Chuchman, Stayton
Media: SID.17520640 Tags: LIVE; 2017
Susan Graham sings the title role of the fabulous woman of the world who sets out to conquer glamorous old Paris and get the one thing that has eluded her—a commitment from her playboy first love.

The matinee performance on December 28 will feature a pre-curtain open house, at 11AM, where audiences can connect with some of the designers, singers, dancers, musicians, and technical wizards behind the production.
-metopera.org”

Production a gift of M. Beverly and Robert G. Bartner, Mr. and Mrs. Paul M. Montrone, and the Estate of Anne Tallman

Production a gift of The Annenberg Foundation

Production a gift of the Lila Acheson and DeWitt Wallace Fund for Lincoln Center, established by the founders of The Reader’s Digest Association, Inc.

Revival a gift of Ekkehart Hassels-Weiler”

Although the Met presented the American premiere of Turandot in 1926, Puccini’s last work didn’t become an audience favorite until the opening of Cecil Beaton’s 1961 production, which featured Birgit Nilsson and Franco Corelli. Their dynamic (and highly competitive) appearances together helped secure the opera’s box office appeal.

Production a gift of The Sybil B. Harrington Endowment Fund

Revival a gift of the Metropolitan Opera Club “

Production a gift of Catherine and Ephraim Gildor

Revival a gift of Rolex and Mrs. Jayne Wrightsman
“

“THE EXTERMINATING ANGEL : Adès
Original Air Date: 11/18/2017
Cast: Adès; Luna, Echalaz, Matthews, etc.
Media: SID.18160640 Tags: LIVE; 2018
From metopera.org: Following the rapturous response to his last opera, The Tempest, the Met presents the American premiere of Thomas Adès’s The Exterminating Angel, inspired by the classic Luis Buñuel film of the same name. Hailed by the New York Times at its 2016 Salzburg Festival premiere as “inventive and audacious … a major event,” The Exterminating Angel is a surreal fantasy about a dinner party from which the guests can’t escape. Tom Cairns, who wrote the libretto, directs the new production, and Adès conducts his own adventurous new opera.

Music by Thomas Adès, libretto by Tom Cairns in collaboration with the composer, based on the screenplay by Luis Buñuel and Luis Alcoriza”

Production a gift of The Sybil B. Harrington Endowment Fund

Revival a gift of Role”X

SAMSON ET DALILA : Saint-Saens
Elder; Garanca, Alagna, Naouri, Azizov, Belosselskiy
SID.18390106
* Opening Night of 2018-2019 Season *
* LIVE Broadcast SirisuXm and Metopera.org *  Program *
When mezzo-soprano Elīna Garanča and tenor Roberto Alagna joined forces for a new production of Carmen at the Met, the results were electrifying. Now this star duo reunites for another sensual French opera when they open the season in the title roles of Saint-Saëns’s biblical epic Samson et Dalila. Darko Tresnjak, who won a Tony Award for Best Direction of a Musical in 2014 for A Gentleman’s Guide to Love & Murder, makes his Met debut directing a vivid, seductive staging, featuring a monumental setting for the last-act Temple of Dagon, where the hero crushes his Philistine enemies. Sir Mark Elder conducts the first new Met production of the work in 20 years. 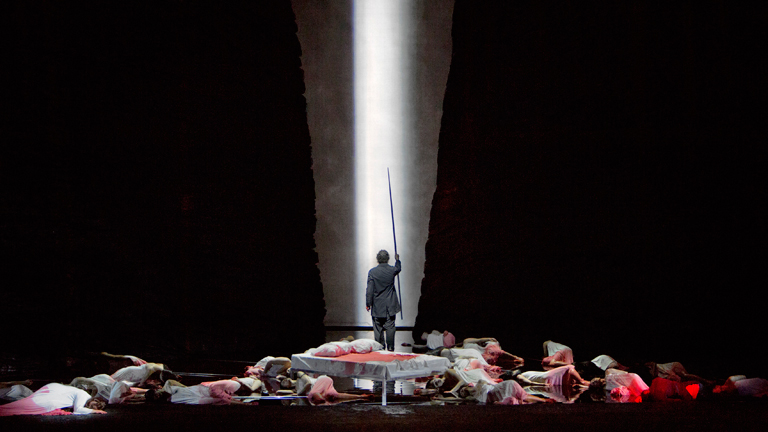